For inductive proximity sensors to operate in a stable manner, without constant “chatter” or switching on/off rapidly close to the switching point, they require some degree of hysteresis.

Hysteresis, basically, is the distance between the switch-on point and the switch-off point when the target is moving away from the active surface. Typical values are stated in sensor data sheets; common values would be ≤ 15%, ≤ 10%, ≤ 5% and so on. The value is taken as a percentage of the actual switch-on distance of the individual sensor specimen. Generally, the higher the percentage of hysteresis, the more stable the sensor is and the farther away the target must move to turn off the sensor.

But occasionally, a sensor will remain triggered after the target has been removed. This condition is called “latching on” and it typically occurs when the sensor remains damped enough to hold the sensor in the “on” condition.

Some factors that could cause “latching on” behavior and ways to correct it are:

Having too much metal near the sensor
Using a quasi-flush, non-flush, or extended-range sensor that is too close to metal surrounding its sides will partially dampen the sensor. While it is not enough to turn the sensor on, it is enough to hold it in the on state due to hysteresis. If there is a lot of metal close to the sides of the sensor, a flush-type sensor may eliminate the latching-on problem, although it will have shorter range.

Using a sensor that is not stable at higher temperatures
Some sensors are more susceptible to latching-on than others as temperature is increased. This is caused by temperature drift, which can increase the sensor’s sensitivity to metals. In these cases, the sensor may work fine at start-up or at room temperature, but as the machinery gets hot it will start latching on. The solution is to make sure that the sensor is rated for the ambient temperature in the application. Another option: look for sensors designed properly by a reputable manufacturer or choose sensors specifically designed to work at higher temperatures.

Having strong magnetic fields
This happens because the magnetic field oversaturates the coil, so that the sensor is unable to detect that the target has been removed. If this is the case, replace them with weld-field-immune or weld-field-tolerant sensors. 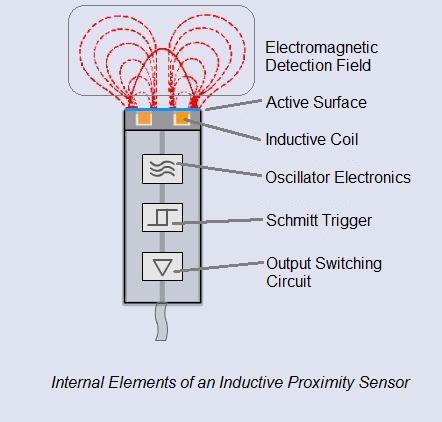 For a more detailed description of how inductive proximity sensors detect metallic objects without contact, please take a look at this related blog post.