In many industries, especially in Packaging, the need to minimize capital equipment costs drives engineers to implement low-cost, manual methods of size change (also called format change) on their machinery. In most cases, this means hand-driven cranks with mechanical dial pointers and/or mechanical revolution counters.

While cost is saved on the procurement side, cost is also shifted over to the operational side. Plant management is left with the task of keeping accurate records of various machine set-ups needed to run different products, as well as the task of training machine operators to perform all machine set-ups correctly. It doesn’t always go as smoothly as expected, and machine reformatting can result in longer downtime than planned, machine stoppages, and possibly excessive scrap.

The key to size-change improvement is capturing the linear movements of the machine components and bringing them into the control system, and then providing “smart” visual feedback to the machine operator during setup. For capturing machine position, a robust and cost-effective magnetic linear encoder is ideal. However, traditional linear encoders deliver an A-B quadrature incremental signal, which requires re-homing upon start-up or after a power loss. What’s needed is an absolute encoder signal, but that brings other challenges such as the cost and complexity of implementing an absolute signal like SSI (Synchronous Serial Interface). 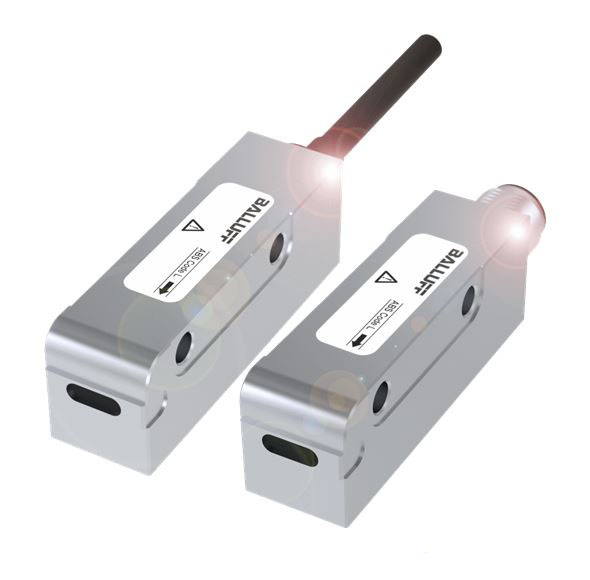 option that eliminates the problem of non-absolute feedback and the hassle of absolute position signal interface: IO-Link. IO-Link is a multi-vendor, non-proprietary, device-level serial digital interface that can be aggregated onto today’s Ethernet industrial networks. Magnetic linear encoders are now available that feature absolute position indication combined with the ease and convenience of the IO-Link communication protocol.

Now we just need to provide visual feedback to the machine operator regarding which direction and how far to turn the hand cranks. Once 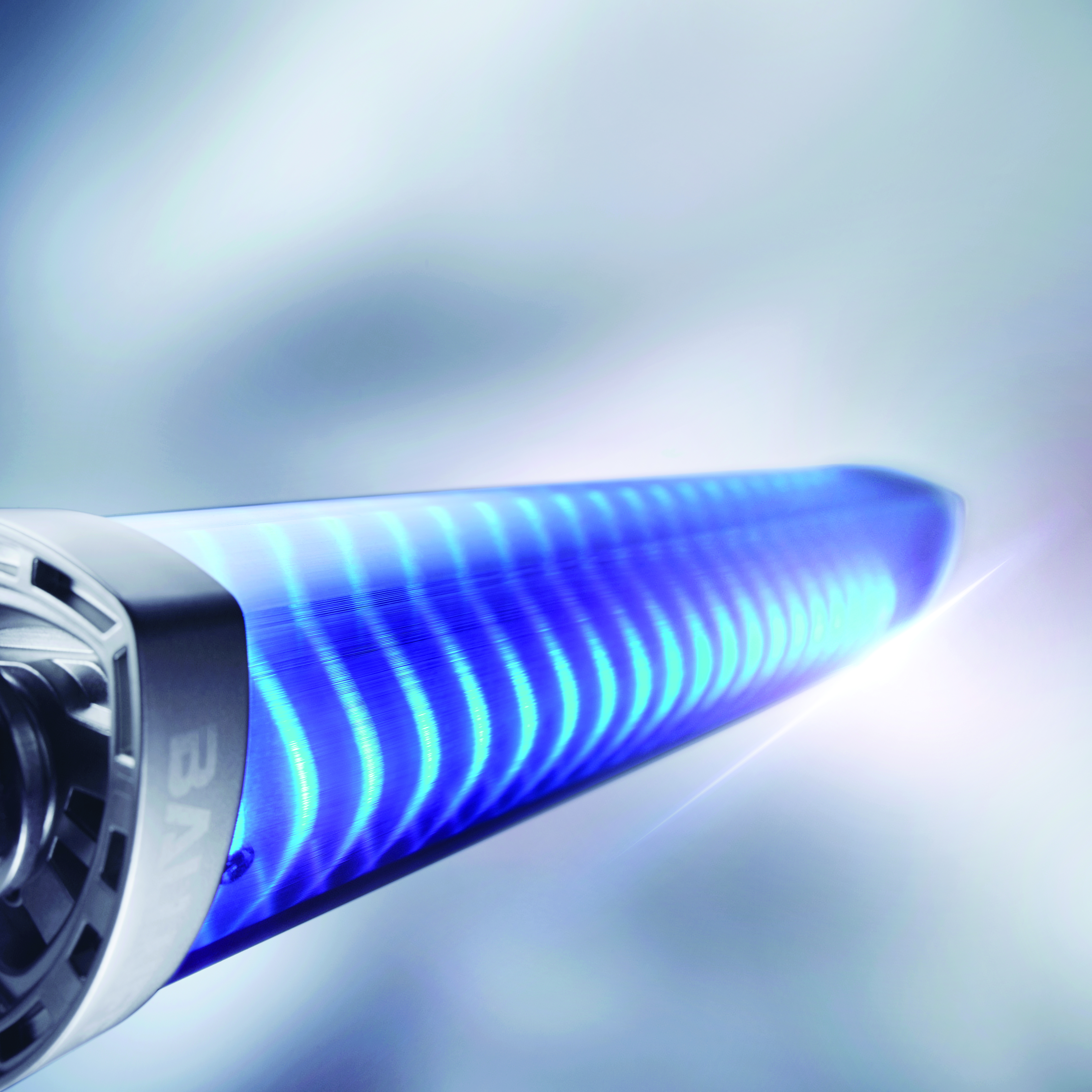 again, IO-Link provides the answer in the form of an IO-Link-enabled, fully programmable multi-segment LED stack light. When a new machine set up is required, the position parameters are stored in the controller. The controller communicates over IO-Link to the LED stack lights, indicating to the operator which dials need to be turned and in which direction. For example, a horizontally mounted stack light could be lit red on the right half, indicating that the dial needs to be turned to the right. As the position moves closer to the proper setting, the red segments count down until the entire stack light goes green, indicating that the correct position for that axis has been reached. No paper records to maintain and store, and very little training required with the intuitive operator visualization.

Linear encoders – absolute or incremental?  Incremental encoders are simple, inexpensive, and easy to implement, but they require that the machine be homed or moved to a reference position.  Absolute encoders don’t require homing, but they’re usually more expensive, and implementation is a bit more involved.  What if you could get an incremental encoder that also gave you absolute position?  Would that be great, or what?  Read on.

Incremental encoders are pretty simple and straightforward.  They provide digital pulses, typically in A/B quadrature format, that represent relative position movement.  The number of pulses the encoder sends out correspond to the amount of position movement.  Count the pulses, do some simple math, you know how much movement has occurred from point A to point B.  But, here’s the thing, you don’t actually know where you are exactly.  You only know how far you’ve moved from where you started.  You’ve counted an increment of movement.  If you truly want to know where you are, you have to travel to a defined home or reference position and count continuously from that position.

Absolute encoders, on the other hand, provide a unique output value everywhere along the linear travel, usually in the form of a serial data “word”.  Absolute encoders tell you exactly (absolutely) where they are at all times.  There’s no need to go establish a home or reference position.

So absolute is better, yes?  If that’s so, then why doesn’t everyone use them instead of incremental encoders?

It’s because incremental encoders typically cost a lot less, and are much easier to integrate.  In terms of controller hardware, all you need is a counter input to count the pulses.  That counter input could be integral to a PLC, or it could take the form of a dedicated high-speed counter module.  Either way, it’s a fairly inexpensive proposition.  And the programming to interpret the pulse count is pretty simple and straightforward as well.  An absolute encoder will usually require a dedicated motion module with a Synchronous Serial Interface (SSI, BiSS, etc.).  These interfaces are going to be both more expensive and more complex than a simple counter module.  Plus, the programming logic is going to be quite a bit more involved.

So, yes, being able to determine the absolute position of a moving axis is undoubtedly preferable.  But the barriers to entry are sometimes just too high.  An ideal solution would be one that combines the simplicity and lower cost of an incremental encoder with the ability to also provide absolute position.

Fortunately, such solutions do exist.  Magnetic linear encoders with a so-called Absolute Quadrature interface provide familiar A/B quadrature signals PLUS the ability to inform the controller of their exact, absolute position.  Absolute position can be provided either on-demand, or every time the sensor is powered up.

How is this possible?  It’s really quite ingenious. You could say that the Absolute Quadrature encoders are “absolute on the inside, and incremental on the outside”.  These encoders use absolute-coded magnetic tape, and the sensing head reads that position (with resolution as fine as 1 µmeter and at lengths up to 48-meters, by the way).  But, during normal operation, the sensor head outputs standard A/B quadrature signals.  Remember though, it actually knows exactly where it is (absolute inside…remember?), and can tell you if you ask.  When requested (or on power-up, if that’s how you have it configured), the sensor head sends out a string, or burst, of A/B pulses equal to the distance between the home position and the current position.  It’s as if you moved the axis back to home position, zeroed the counter, and then moved instantly back to current position.  But no actual machine movement is necessary.  The absolute burst happens in milliseconds.

So, to sum it up, Absolute Quadrature linear encoders provide a number of advantages:

If you’d like to learn more about linear encoders with Absolute Quadrature, go to: http://www.balluff.com/local/us/news/product-news/bml-absolute-quadrature/

Tabletop automation is a trend that is gaining momentum, especially in the fields of medical laboratory automation and 3D printing. Both of these applications demand a level of linear positioning accuracy and speed that might suggest a servomotor as a solution, but market-driven cost constraints put most servos out of financial consideration. New advances in stepper motor design, including higher torque, higher power ratings, and the availability of closed-loop operation via integrated motor encoder feedback are enabling steppers to expand their application envelope to include many tasks that formerly demanded a servo system.

Meeting the Demand for Even More Accurate, More Reliable Positioning As tabletop automation development progresses, performance demands are increasing to the point that steppers systems may struggle to meet requirements. Fortunately, the addition of an external linear encoder for direct position feedback can enhance a stepper system to enable the expected level of reliable accuracy. An external linear encoder puts drive-mechanism non-linearity inside the control loop, meaning any deviations caused by drive component inaccuracy are automatically corrected and compensated by the overall closed-loop positioning system. In addition, the external linear encoder provides another level of assurance that the driven element has actually moved to the position indicated by the number of stepper pulses and/or the movement reported by the motor encoder. This prevents position errors due to stepper motor stalling, lost counts on the motor encoder, someone manually moving the mechanism against motor torque, or drive mechanism malfunction, i.e. broken drive belt or sheared/skipped gearing.

The position signals from the external encoder are typically incremental, meaning a digital quadrature square wave train of pulses that are counted by the controller. To find a position, the system must be “homed” to a reference position and then moved the required number of counts to reach the command position. The next move requires starting with the position at the last move and computing the differential move to the next command position. Absolute position signals, typically SSI (synchronous serial interface) provide a unique data value for each position. This position is available upon power-up…no homing movement is required and there is no need for a pulse counter. A recent innovation is the hybrid encoder, where the encoder reads absolute position from the scale, but outputs a quadrature incremental pulse train in response to position moves. The hybrid encoder (sometimes referred to as “absolute quadrature”) can be programmed to deliver a continuous burst of pulses corresponding to absolute position at power up, upon request from the controller, or both.