Safety Over IO-Link makes it easier to align a robot’s restricted and safeguarded spaces, simplifies creation of more dynamic safety zones and allows creation of “layers” of sensors around a robot work area.

For the past several years, “collaboration” has been a hot topic in robotics.  The idea is that humans and robots can work closely together, in a safe and productive manner.  Changes in technology and standards have created the environment for this close cooperation. These standards call out four collaborative modes of operation: Power & Force Limiting, Hand Guiding, Safety Rated Monitored Stop, and Speed & Separation Monitoring (these are defined in ISO/TS 15066).

Power & Force Limiting is what many people refer to when speaking about Collaborative Robots, and it applies to robots such as Baxter from Rethink Robotics and the UR series made by Universal Robots.  While the growth in this segment has been fast, there are projections that traditional robots will continue to make up 2/3 of the market through 2025, which means that many users will want to improve their traditional robot solutions to “collaborate”.

Hand guiding is the least commonly applied mode, it is used for very specific applications such as power assist (one example is loading spare tires into a new car). It generally requires special equipment mounted on the robot to facilitate the guiding function. 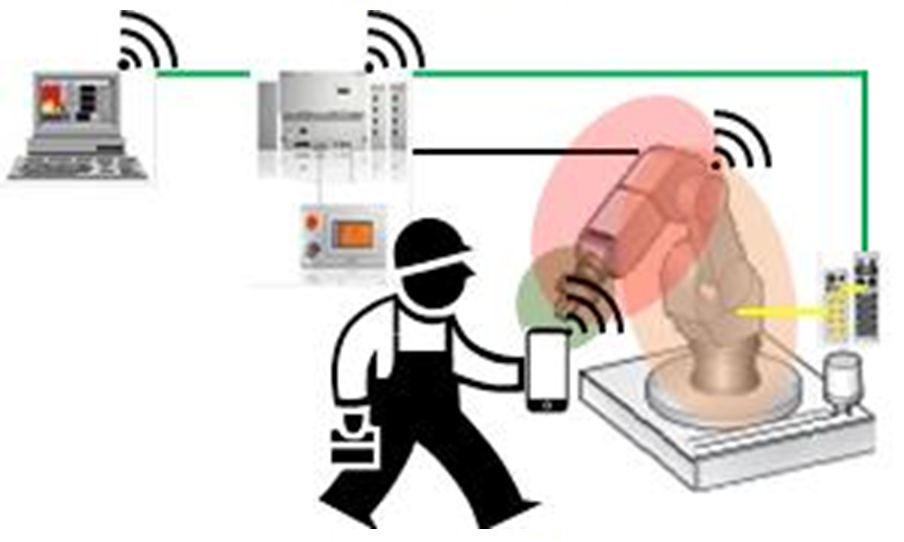 The third item is especially relevant in enabling collaborative operation of traditional robots.  The updated standards allow the creation of a “shared workspace” for the robot and human, and how they interact in this space depends on the collaborative mode.  At a simple level, Safety Rated Monitored Stop and Speed & Separation Monitoringrequire this “shared workspace” to be monitored, this is generally accomplished using a “restricted space” and a “safeguarded space.”  These “spaces” must be monitored using many sensors, both inside and outside the robot.

First, the robot’s “restricted space” is set up to limit the robot’s motion to a specific 3-dimensional volume.  In the past, this was set up through hard stops, limit switches or sensors, more recently the ANSI RIA R15.06 robot standard was updated to allow this to be done in software through safety-rated soft axis and space limiting.  Most robot suppliers offer a software tool such as “Safe Move” or Dual Check Safety” to allow the robot to monitor its own position and confirm it is where it is supposed to be.  This feature requires safe position feedback and many sensors built into the robot.  This space can change dynamically with the robot’s program, allowing more flexibility to safely move the robot and assure its location.

Second, a safeguarded space must be defined and monitored.  This is monitored using safety rated sensors to track the position of people and equipment around the robot and send stop (and in some cases warning) signals to the safety controller and robot.  Safety Over IO-Link helps connect and manage the safety devices, and quickly send their signals to the control system.

In the past, integrating a robot with safety meant wiring many safety sensors with long cable runs and many terminations back to a central cabinet.  This was a time consuming, labor intensive process with risk of miswiring or broken cables.  IO-Link significantly reduces the cost, speed and length of connections due to use of standard cables and connectors, and the network approach.  It is also much simpler for customers to change their layout using the network, master & hub approach.

Customers wanting collaborative capability in traditional robots will find that Safety Over IO-Link can significantly simplify and reduce the cost of the process of integrating the many advanced safety sensors into the application. 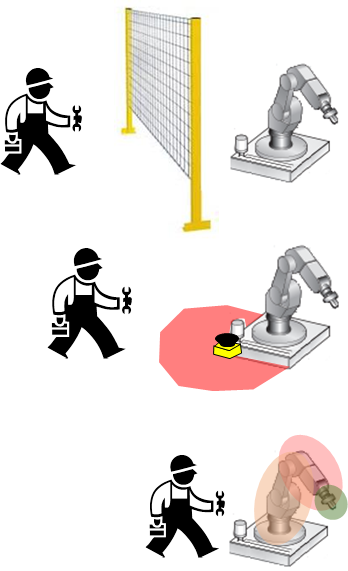